The Ganjali Khan is a Safavid-era building complex, located in the old center of city of Kerman, Iran. The complex is composed of a school, a square, a caravanserai, a bathhouse, a water reservoir, a mint, a mosque and a bazaar.

The Ganjali Khan Complex was built by Ganj Ali Khan who governed Kerman, Sistan and Kandahar provinces under Safavid Shah Abbas I. The architect of the complex was Mohammad Soltani from Yazd.

In ancient Iran, the squares of the cities were established near the governorships and were places for gatherings and ceremonies. The Ganjali square is 99 meters by 54 meters and Similar to Naqsh-e Jahan Square in Isfahan and Mir Chakhmagh Square in Yazd, is surrounded by urban elements such as bazaars, Caravanserais and schools. 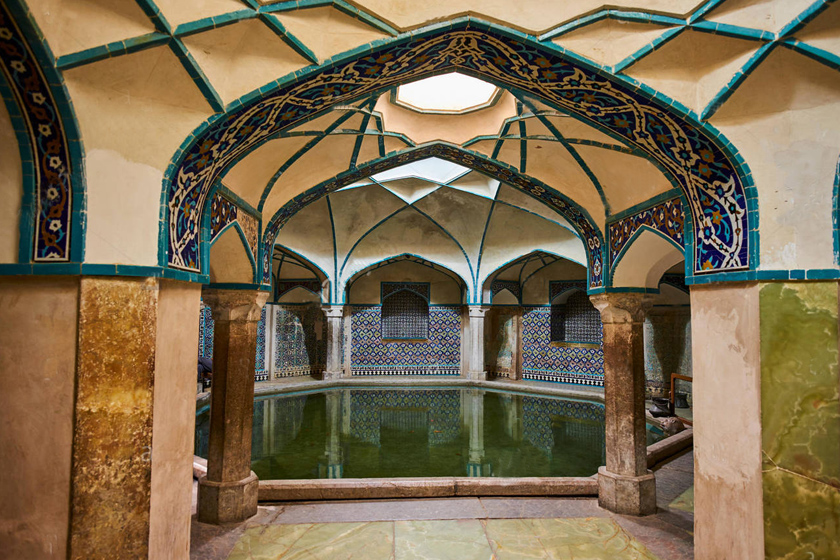 Built in 1631, it is located on the southern side of Ganjali Square, off a section of Vakil Bazaar known as Ganjali Bazaar. The entrance of the building are painted with ornaments of the Safavid era. An interesting feature of its architectural finish is that the sculptured stones of the ceiling coincide with that of the flooring. It is composed of a disrobing room, cold room and hot room. The Ganjali Baths are unique works of architecture decorated with exquisite tile works, paintings, stuccos, and arches.

The bathhouse were converted into an anthropological museum in 1971. 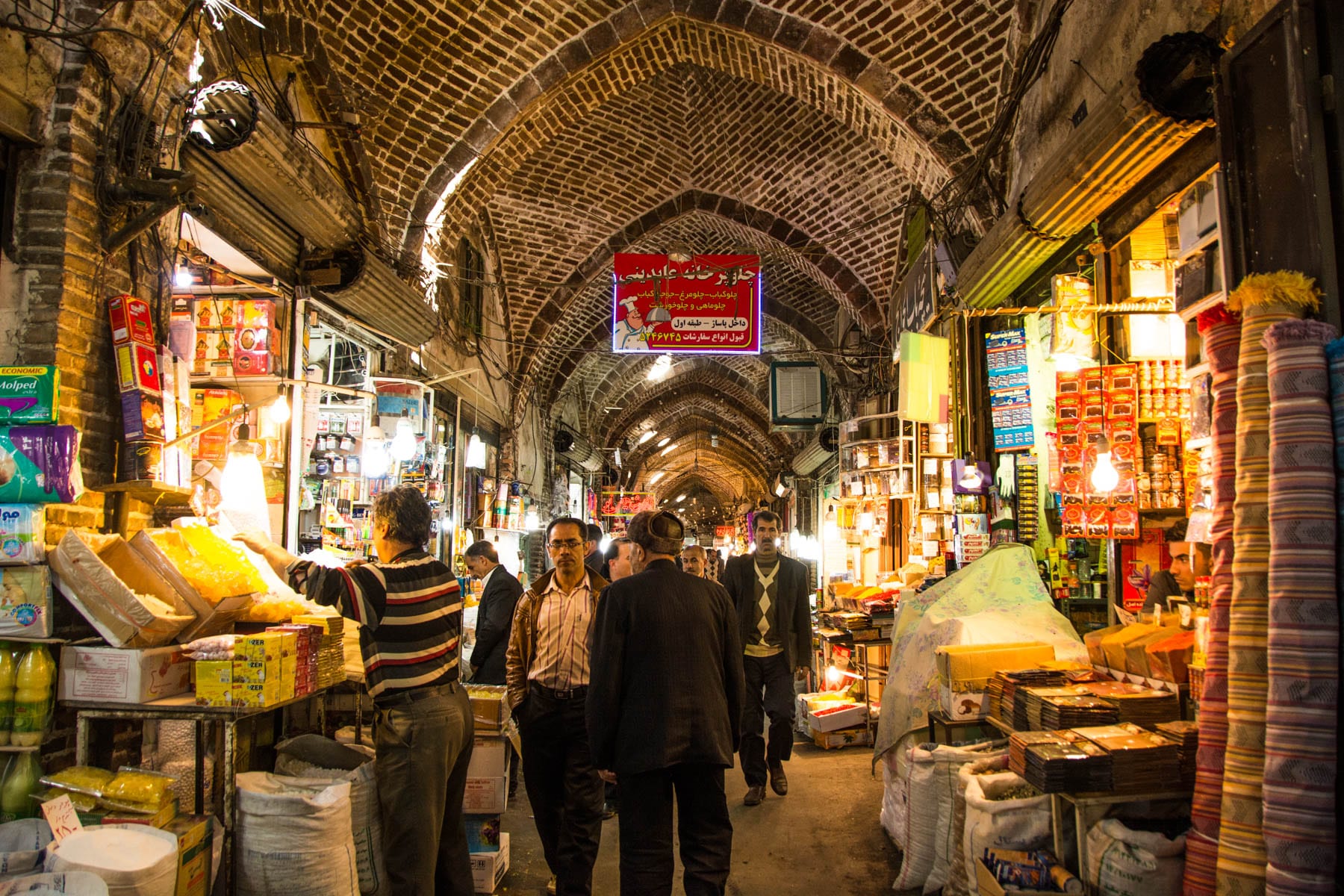 The bazaar is located in southern part of Ganjali Square. Inside, the bazaar is decorated with exquisite plasterwork and wall paintings and although they are 400 years old, they are still well-preserved. The bazaar is 93 meters long and is connected to Ganjali square through 16 iwans and vaults.

The mint’s construction started in 1598 and ended in 1625. The interior decorations consist of ochre plasterwork and brickwork. The building has a tall dome crowned by a cupola to admit light and vent air. The mint was converted into a numismatics museum in 1970. The museum displays coins from different periods such as Parthian, Sassanid, Safavid and Afsharid periods. 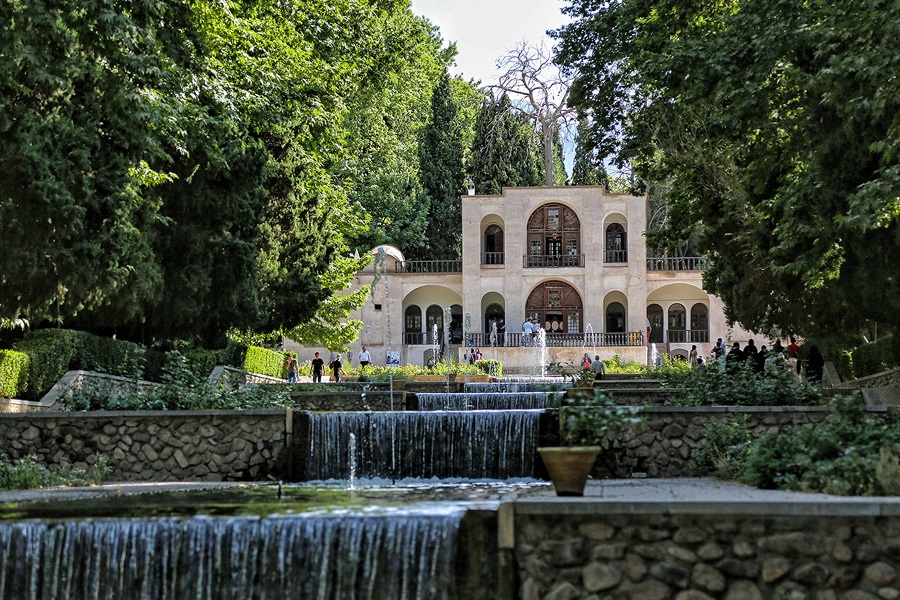 The garden is 5.5 hectares with a rectangular shape and a wall around it. It consists of an entrance structure and gate at the lower end and a two-floor residential structure at the upper end. The distance between these two is ornamented with water fountains by the natural incline of the land. The garden is a fine example of Persian gardens that take advantage of suitable natural climate.

A garden was built for Mohammad Hasan Khan Qajar, and was entirely remodeled and extended around 1870 by Abdolhamid Mirza Naserodolleh during the eleven years of his governorship in the Qajar dynasty. The current visible structure dates almost entirely to this second period, and is formally related to similar gardens designed by NaseroDolleh in Tehran. The construction was left unfinished, due to the death of Abdolhamid Mirza in the early 1890s. 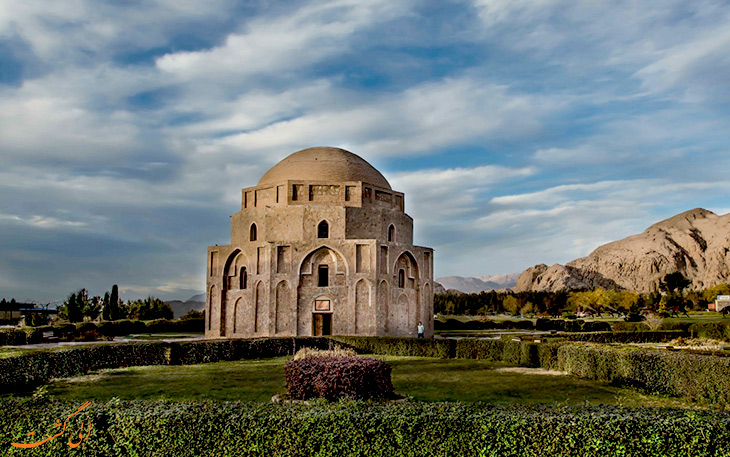 Jabalieh or Rock Dome, is located in Kerman, Iran.  Gonbad-e Jabalīyeh is a place of historical importance in Iran. It has been constructed of stone and brick, though the building is of stone and gypsum, and its architectural affects have been inspired from the Sassanide period. It was repaired during the first decades of the advent of Islam in Iran. It has an elevation of 1768 meters above sea level.

It is of octagonal design and comprises three floors crowned by a rather flat dome, totally empty inside. It appears to predate the 2nd millennium AD and may have been a Zoroastrian building, and is remarkable because of being constructed of stone rather than the more usual brick.

Rayen Castle is an adobe castle 100 Kilometers south of Kerman province, Iran. It is situated on the domain of the mountain Haraz. The medieval mud brick city of Rayen is similar to Arg-e-Bam which was destroyed in an earthquake in December 2003. Rayen displays all the architectural elements of a deserted citadel. It is extremely well preserved, despite numerous natural disasters that have destroyed similar structures nearby, and it is one of the most interesting sites in Iran.

Rayen Castle was inhabited until 150 years ago, and although believed to be at least 1000 years old, may have foundations from the pre-Islamic Sassanid era. According to the old documents, it was situated on the trade route, and was one of the centers for trading valuable goods and quality textiles. It was also a center of sword and knife manufacturing, and later on, also guns. With a waterfall near the city and several thermal springs, it’s become and attractive touristic destination. During the reign of third Yazdgerd, the Sassanid King, Arabs could not conquer this city thanks to its high walls supporting the counterparts of the city.