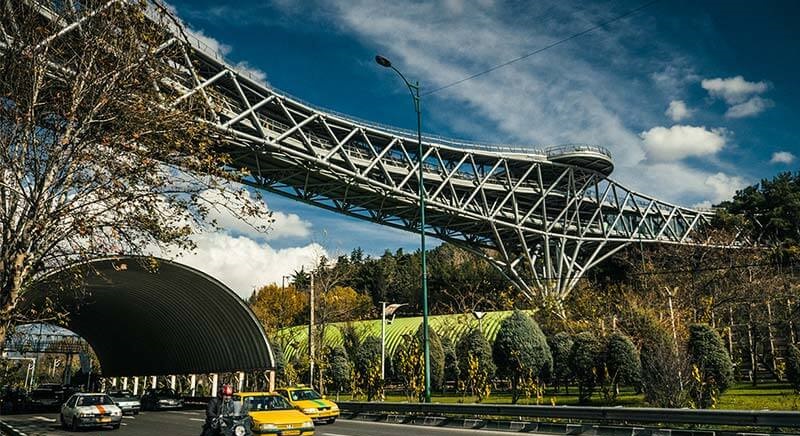 The Tabi’at Bridge is the largest pedestrian overpass built in Tehran, Iran. The bridge connects two public parks; Taleghani Park and Abo-Atash Park by spanning Modarres Expressway, one of the main highways in northern Tehran. The word tabi’at means “nature” in the Persian language.
The bridge was designed by Leila Araghian, Alireza Behzadi and Diba Tensile Architecture. It has won several awards, including the Popular Choice Prize for Highways & Bridges from the A+ Awards, a global architectural competition based in New York.
In designing the bridge, a process which took a total of a year, Araghian wanted it to “be a place for people to stay and ponder, not simply pass. To achieve this the bridge is not straight and contains benches and seating.
Construction of the bridge started in 2010, using a total of 2000 tons of steel and 10000 cubic meter of concrete before it was finished in October 2014. Construction of the bridge over a large highway was described as a big challenge, with platforms and temporary tunnels built to ensure that nothing fell onto the road below. 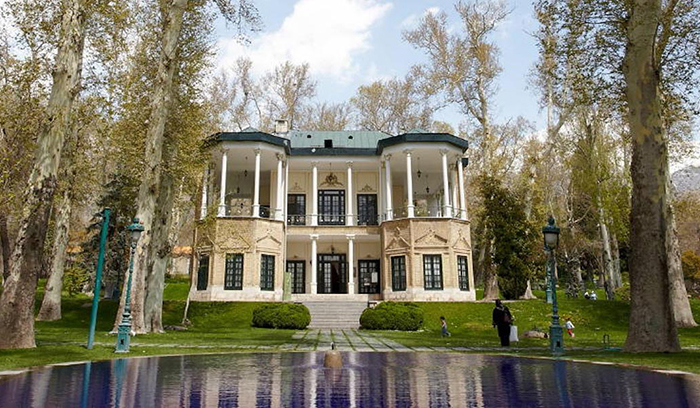 The Sa’dabad Palace Complex is a 300 hectares complex built by the Qajar and Pahlavi monarchs, located in Shemiran, Greater Tehran, Iran. Today, the official residence of the President of Iran is located adjacent to the complex.
The complex includes more than 180 hectares of natural forest, streets, qanats, galleries, mansions, palaces and museums.
It was initially built and inhabited by Qajar dynasty off monarchs in the 19th century. Shah Mohammad Reza Pahlavi, moved there in the 1970s. After the 1979 Revolution, the complex became a public museum.
Large parts of the complex are museums, which are accessible to visitors. Other parts are currently used to the Office of the President of the Islamic Republic of Iran. 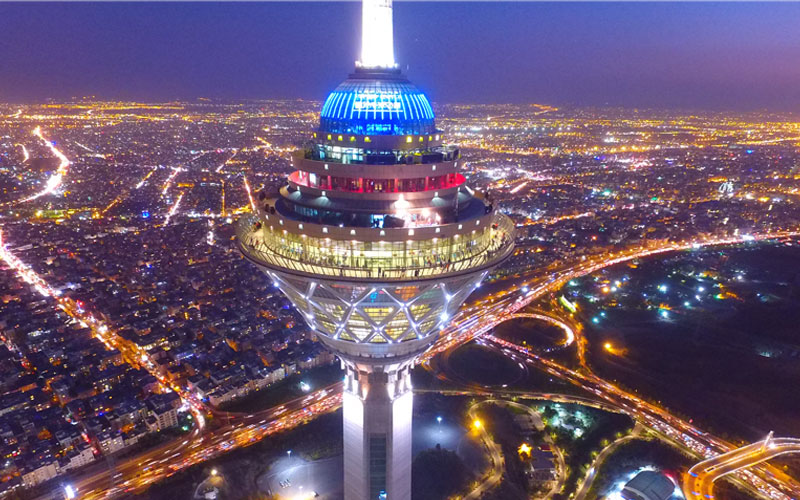 Milad Tower is a multi-purpose tower in Tehran, Iran. It is the sixth-tallest tower and the 24th-tallest freestanding structure in the world.
It is located between Qarb Town and the district of Gisha, standing at 435 meters from the base to the tip of the antenna. The head consists of a large pod with 12 floors, the roof of which is at 315 meters.
The tower is a part of the International Trade and Convention Center of Tehran, which also includes a five-star hotel and an IT park.
The construction of the tower was commenced in 1997.
The design of the project was headed by Iranian architect Mohammad Reza Hafezi. The general contractor was the company of Boland Payeh, and the main client and investor was the company of Yadman Sazeh, a representative of the Municipality of Tehran.
The tower was officially opened on February 20, 2009. 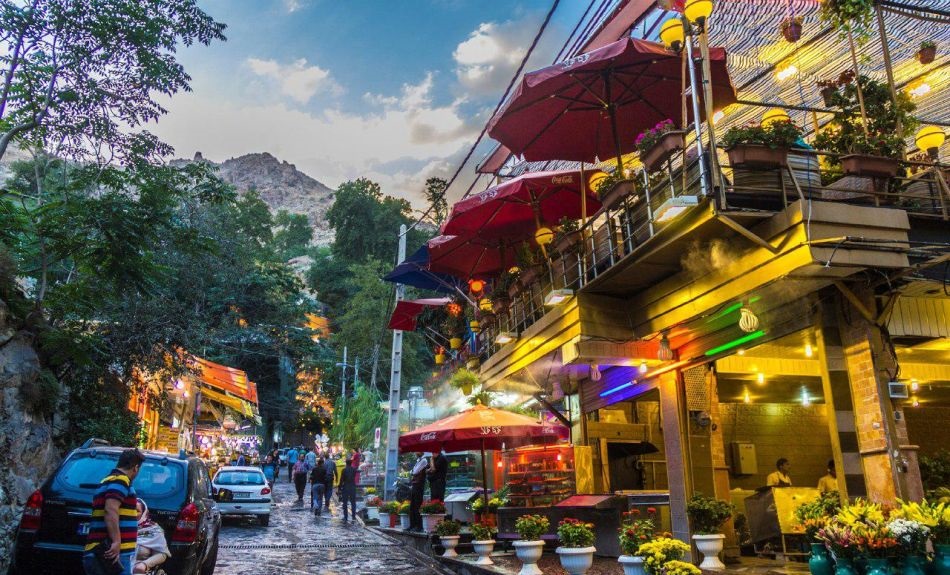 Darband is a neighborhood inside Tehran’s metropolitan limits. It is the beginning of a popular hiking trail into Mount Tochal, which towers over Tehran. A chairlift is also available for those not interested in hiking.
The Persian term Darband translates to “door of the mountain”.
The initial start of the trail at Darband is about 250 meters long and is dotted with a number of small cafes and restaurants. These are quite popular and are busy in the evenings, as locals and tourists alike visit the many lounges along the trail.
The Zahir-o-dowleh cemetery, where many Iranian giants of art and culture such as Iraj Mirza, Forough Farrokhzad, Mohammad-Taqi Bahar, Abolhasan Saba, Ruhollah Khaleqi, Rahi Mo’ayyeri and Darvish Khan are buried, is also located in Darband. 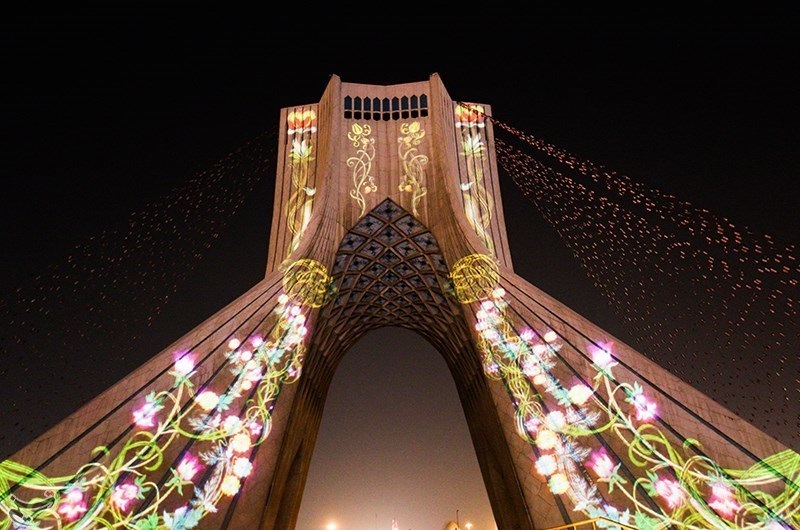 The Azadi Tower formerly known as the Shahyad Tower, is a monument located at Azadi Square, in Tehran, Iran. It is one of the landmarks of Tehran, marking the west entrance to the city, and is part of the Azadi Cultural Complex, which also includes a museum underground.
The tower is about 45 meters tall and is completely clad in cut marble. It was commissioned by Mohammad Reza Pahlavi, the last Shah of Iran.
After winning a competition, architect Hossein Amanat was tasked to design the tower, his client being the Council of Celebrations. His ideas were based upon classical and post-classical Iranian architecture, popular influences on art in the 1960s following the White Revolution. 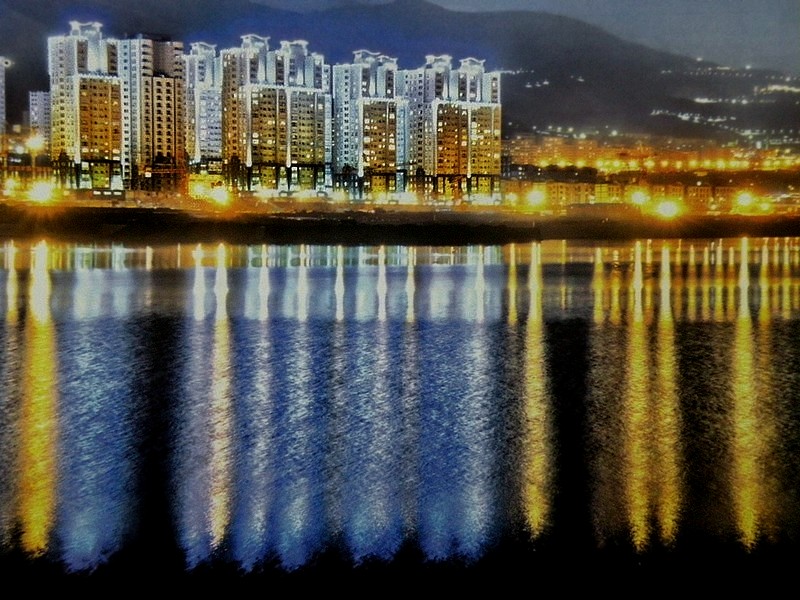 Chitgar Lake is an artificial and recreational lake located to the north of Chitgar Park in northwestern Tehran, Iran.
Also known as the Lake of the Martyrs of the Persian Gulf, the complex has a total area of around 250 hectares; 130 hectares across the lake and 120 hectares on its coastal zone and resorts.

Tochal‎ is a mountain and ski resort located on the Alborz mountain range, adjacent to the metropolitan area of Tehran in northern Iran. It includes a 12-kilometre-long ridge. Its highest peak, is at an elevation of 3,964 meters.
A gondola lift runs from Tehran to the Tochal ski resort and hotel, all as a part of Tochal Complex.

The Niavaran Palace Complex is a historical palace complex situated in Shemiran (northern Tehran), Iran. It consists of several palace buildings and monuments dating back to the Qajar and Pahlavi eras.
The complex traces its origin to a garden in the region of Niavaran, which was used as a summer residence by Fath-Ali Shah (1772-1834) of the Qajar Dynasty.
A pavilion was built in the garden by the order of Naser Al-Din Shah (1831-1896) of the same dynasty, which was initially referred to as Niavaran, and was later renamed Saheb Qaranie. The pavilion of Ahmad Shah was built in the late Qajar period.

The Imperial crown jewels of Iran include elaborate crowns, thirty tiaras, and numerous aigrettes, a dozen bejeweled swords and shields, a number of unset precious gems, numerous plates and other dining services cast in precious metals and encrusted with gems, and several other more unusual items collected by the Iranian monarchy from the 16th century (Safavid dynasty). The collection is housed at The Treasury of National Jewels.
It is situated inside the Central Bank of the Islamic Republic of Iran on Tehran’s Ferdowsi Avenue. The museum has onsite guides with knowledge of Persian, English, French and Russian languages. There are also guide booklets available in English, Persian, French, Russian, German, Japanese and Arabic.

The City Theater is a performing arts complex in Tehran, the capital of Iran. It was built with the initiative of Shahbanu Farah Pahlavi under the rule of Mohammad Reza Pahlavi, the last Shah of Iran.
It contains several performance spaces including the halls of Charsou, Qashqai, Saye, and the main hall. The complex was designed by architect Ali Sardar Afkhami in the 1960s, and opened in 1972. After the 1979 Revolution, the Ministry of Culture and Islamic Guidance has overseen its operation. 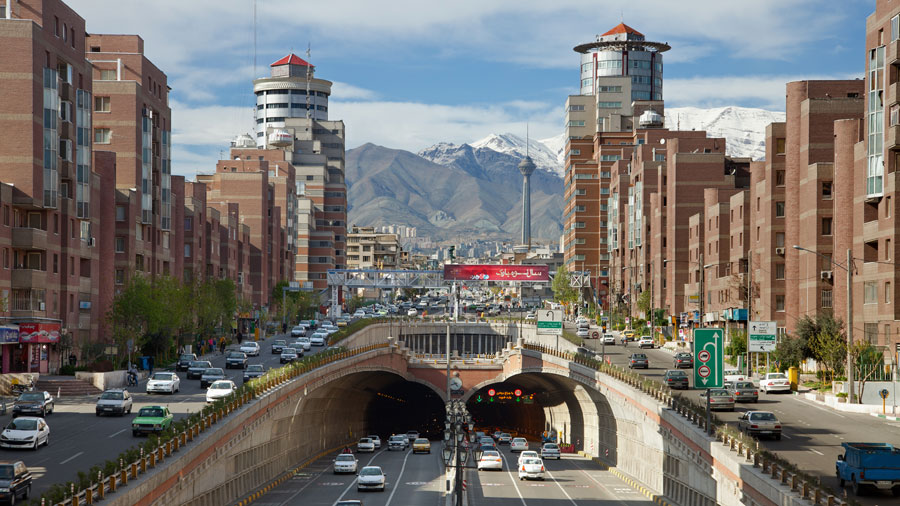 You can book and buy tours of Tehran and Iran through the Tolouesafaryad travel agency to the contact number (+983132352673) or online from this page on ( Iranisfahantour.com )